The Story of Dainty Dinah 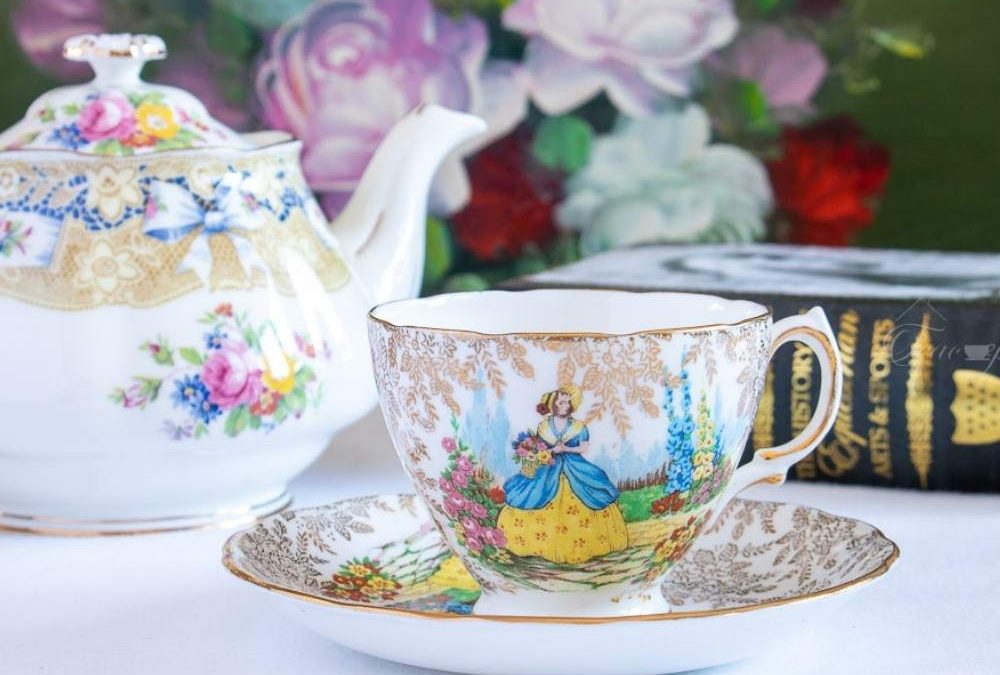 The story of Dainty Dinah is a sweet one! She is a beautiful young lady decked out in her crinoline skirt, flowers in hand walking in the garden. You may have seen her before. She can be found on many teacups from Royal Albert to Colclough and beyond. But who is she?

The story of Dainty Dinah begins many years ago. She was a North-East English icon – the Angel of the North of her day according to an article from The Northern Echo. Mr. Horner, a gentleman from Norfolk, England, took over a corner of Chester-le-Street in 1910. Initially, it was where jam was produced in a steam-powered factory and was originally owned by J. Samuel. Once George Horner became proprietor of the factory, he converted it to toffee production. At first, Mr. Horner produced confectionaries under the name “Mermaid”. In 1914, he began marketing the “Dainty Dinah” line of toffee candy, rumored to have caused a cavity or two in its time.

Alice Scott The Face Behind The Icon

Dainty with her dark, moony face that was fringed by an Edwardian bonnet and wearing a crinoline skirt. It is said that Dinah was modeled on Mr. Horner’s chauffeur, Alice Scott, who died in 2001 at age 102.

Alice Scott was the first model to advertise for Chester-le-Street confectioners Dainty Dinah more than 80 years ago. Born in 1899, Alice lied about her age to get the job of chauffeur to George Horner, owner of the famous toffee factory, when she was just 16. She later became personal assistant to Mr. Horner, who selected her to be the face of Dainty Dinah.

Her face adorned dozens of posters all over the region as she became one of the North-East’s most recognizable faces. The image was also printed on thousands of tins which were sold around the world and still available on sites like Etsy or Ebay.

These images from Getty Images show many of the advertising posters from that time.

The Lady on Teacups of Every Shape And Size

Dainty Dinah has been depicted in slightly different versions on teacups and other various pieces of china for many years. Sometimes, she is referred to as the Crinoline Lady in reference to her voluminous skirt. Shown below are 3 different teacups produced by Royal Albert: 1 standard teacup and 1 butterfly-handled teacup, all examples from the 1930s.

The versions of Dainty Dinah vary slightly but are always a variation of a sweet young lady in a bonnet with a crinoline skirt. Over the years, she had been seen on not only teacups but tea plates and cake stands, teapots, coffee pots, and other tea time accouterments.

Royal Albert depicts Dainty Dinah having a blue skirt while this Colclough teacup and saucer show below has her dressed in yellow.

I hope you have enjoyed learning the history behind these beautiful pieces and the story of Dainty Dinah, an interesting one that lives on to this day. Do you have pieces in your collection paying homage to Dainty Dinah?